So I jumped on NFT wagon for a quick ride

Well, I'm curious.
I cautiously like new things, but I'm not so fast at embracing them.
That's why it took me so long to make my first NFT.

There are legends about selling an NFT jpg for $69M on ETH Blockchain (google artist called Beeple). And I think this is BANANAS.
It was a marketing and PR move rather than anything else.
I mean, the transaction apparently happened and anyone can check it out, but c'mon, $69M? Who is the new owner? I really don't care. I hope he's happy, and uses this jpg well.

There are many services providing tokenizing your art (not only images, but also video and music, and virtually anything in a computer file format, I believe. Hell, I've seen tokenized tweets, even! Shout out to @themarkymark).
Most of the services are Ethereum based, but we are on Hive blockchain and we have such ability too!

In order to test new possibilities,

I took one of my previous paintings, but from halfway stage and went with it in a different direction so the final result varies by a lot. It is more refined, more realistic, and, well it's more of it (2000x2434px)

Turned out tokenizing art wasn't complicated at all with @nftshowroom so I successfully issued my first piece.

The process was user friendly in a couple of steps:

Tokenizing a file (aka making NFT) is all about making it unique. Tokenized file (in my case - my digital painting of Hellboy) is now written into Blockchain and gets ownership rights attached and bonded forever (at least until the Internet exists).

Now I am officially an owner of my painting and I can prove it until someone buys it from me :)

Anybody can go to
https://nftshowroom.com/piotrgrafik/gallery/piotrgrafik_heroes_hellboy-ill-always-look-this-good
Look at it, copy it, and do whatever he wants with it (I mean, nobody can stop it). But the owner of this file can prove his ownership and claim his rights if his file was misused by somebody else.
In that sense, NFT technology is simply a copyright protecting tool.
Neat!

That is the basic idea of NFT, as far as I know. 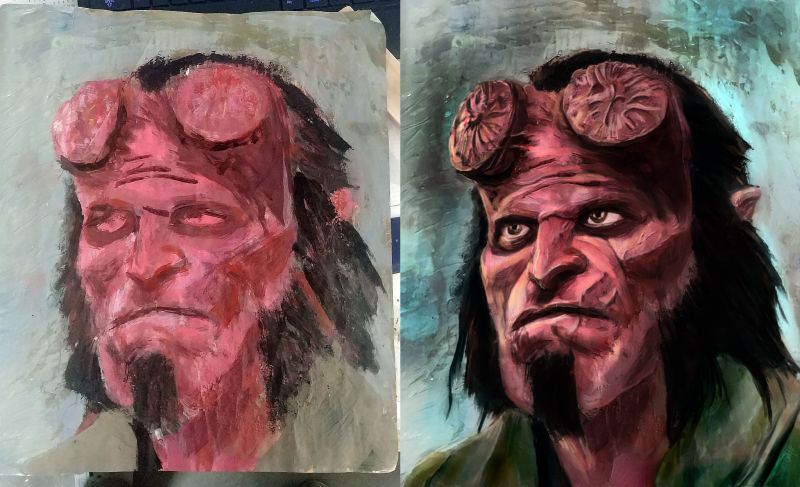